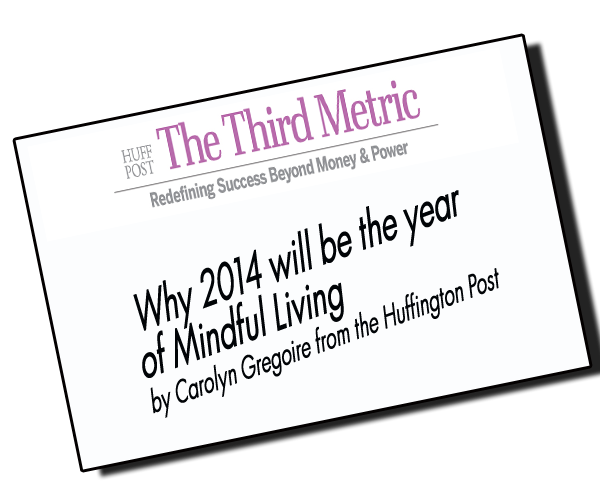 Mindfulness, it seems, is having a moment. 2013 saw a significant spike of interest in holistic health and mindfulness practices like yoga and meditation (not to mention a number of celebrities and CEOs hopping on the mindfulness bandwagon) and it’s a trend that will likely continue to gain momentum in 2014.

“What the culture is craving is a sense of ease and reflection, of not needing to be stimulated or entertained or going after something constantly,” Soren Gordhamer, founder of the Wisdom 2.0 conference, told the New York Times. “Nobody’s kicking out technology, but we have to regain our connection to others and to nature or else everybody loses.”

Here are five reasons that mindfulness will change the world this upcoming year.

According to JWT Worldwide, one of the world’s largest marketing communications brands, 2014 will be characterized by a movement toward mindful living. A number of the items on JWT’s “100 Things to Watch for in 2014” list reflect a growing interest in mindfulness — that is, the cultivation of a focused awareness on the present moment — and mindful living was named one of 10 trends that will shape the world in 2014 and beyond.

“Mindfulness is part of a much larger trend we’ve been observing called mindful living,” Ann Mack, director of trendspotting at JWT, told the Huffington Post. “It’s kind of a counter-trend to the past decade of overly stimulated, ADD-afflicted, tech-saturated culture that we’ve been living in. What was once the domain of the spiritual set has filtered into the mainstream as more people are drawn to this idea of shutting out distractions and focusing on the moment.”

Related trends forecasted on JWT’s 2014 list include “survival of the focused,” “rage against the machine” — a movement characterized by a fear and resentment of technology, and desire for more human experiences — and mindfulness in the classroom.

But just because mindfulness has been labeled a trend, don’t expect the movement to fizzle out any time soon.

“[Mindful living] has staying power, because our world is only going to become more saturated with technology, and therefore people have to find ways to counteract that,” says Mack. “We’re reassessing our relationship with technology. Over the last decade, we’ve allowed technology to rule us. Now we’re trying to be more mindful in the way we use technology and find more balance.” 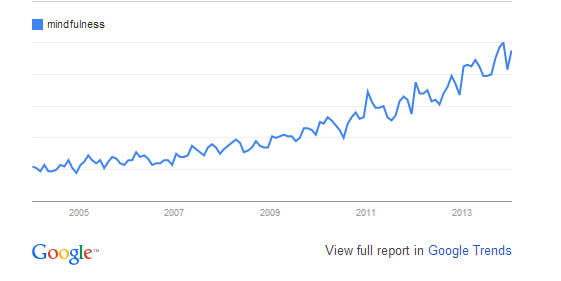 It’s a movement that began gaining steam in 2013, making headlines around the web — from Rupert Murdoch’s announcement that he was taking up Transcendental Meditation to the University of

Major corporations are getting on board.

Silicon Valley may be at least partially responsible for turning mindfulness from a niche New Age practice to a pop culture buzzword. In November, a New York Times Magazine cover story profiled the “hunger to get centered” and influx of mindfulness practices in the tech world and beyond.

“It seems counterintuitive, since technology is perhaps the biggest driver of mindlessness and distraction… but the drive to mindfulness is becoming more prominent in places were tech immersion is more prominent,” says Mack. “A lot of Silicon Valley companies, for instance, are banning technology during meetings in an effort to reign in focus.”

Google even offers its employees a program called Search Inside Yourself (SIY), a mindfulness-based emotional intelligence training program. Chade-Meng Tan, the program’s founder and author of “Search Inside Yourself,” told the Huffington Post that mindfulness can help build compassion, which can be beneficial to not only individuals and community, but also to corporate bottom lines.

“The one thing [that all companies should be doing] is promoting the awareness that compassion can and will be good for success and profits,” said Tan.

Leaders are identifying themselves with it.

A number of high-powered executives — from LinkedIn’s Jeff Weiner to the late Steve Jobs to Oprah — have touted meditation as their secret to success. Even several years ago, you’d never expect to hear a billionaire hedge fund founder admit to meditating daily, but it’s becoming a lot more common.

“Meditation more than anything in my life was the biggest ingredient of whatever success I’ve had,” Bridgewater Associates founder Ray Dalio claimed, while Oprah has said that meditation helps her to create her best work and best life.

Science has proven it’s worth the hype.

Mounting research on the physical and mental health benefits of mindfulness has contributed to and helped to legitimize this growing interest in meditative practice. Recent studies have linked mindfulness with emotional stability and improved sleep, increased focus and memory, enhanced creativity, and lower stress levels, among a host of other positive outcomes.