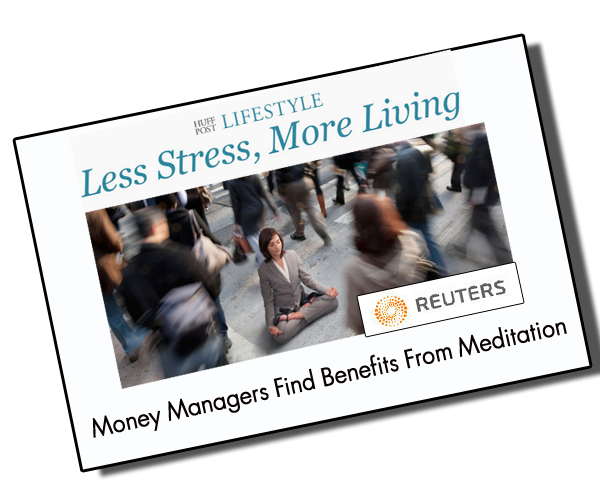 April 17 (Reuters) – From Ray Dalio to Bill Gross, some of the biggest names in money management are practicing meditation.

At a conference last week in Washington, Dalio expounded on how his practice of meditation has helped his investment performance. Georgetown University, at the same conference, announced it would begin to offer a semester-long class on the discipline at its graduate business school. ()

While money managers often joke that clients are the biggest impediment to beating the market because they make emotional mistakes, the truth is that all investors, big and small, share traits which get in the way of making the best choices.

Meditation, which uses breathing and relaxation exercises in an attempt to bring stillness and repose to our usually chaotic minds, may offer some help.

“Meditation more than anything in my life was the biggest ingredient for whatever success I’ve had,” Dalio, founder of $130 billion hedge fund firm Bridgewater Associates, said in an interview at Georgetown in October. “(Meditation) gives me a centeredness, it gives me an ability to look at things without the emotional hijacking, without the ego, in a way that gives me a certain clarity.”

Bond king Bill Gross of Pimco has also said he leaves the trading floor every day for yoga and meditation.

Dalio says the practice has been useful for him, both for generating creative thought, and in evaluating and responding to the huge overload of stimulus which presses upon a money manager every day.

Some money managers who meditate say they believe it helps them to deal with information overload, not just in the sense of remaining calm when events are frantic but also in being able to recognize the most significant bits of data from among the maelstrom.

The attraction meditation has for some money managers is that it can put them into a frame of mind where they are less liable to fall into costly and self-defeating thinking patterns.

The so-called “confirmation bias,” the human tendency to seek out information that confirms your preconceptions while remaining blind to things which don’t, is among the most common errors money managers make.

Confirmation bias itself is driven in part by ego, by people’s desire to be proven right once they’ve publicly espoused a position. People become personally identified with their ideas and suppositions, and take too long to relinquish them even when they are plainly shown to be wrong.

One of the claims of meditation, in contrast, is that it allows people to accept reality as it really is. This perhaps reduces the pain of accepting that one may be wrong.

“Meditation helps with bias,” said Jason Voss, a former money manager who now works for the CFA Institute and who has written a book about meditation and investment. “You’re trying to remove all of the filters off of your thinking so you can see reality as closely as possible.”

Philip Yim Kwong Cheng of the Australian Catholic University theorized in a 2010 article in the Journal of Behavioral Finance that unconscious thought, which meditation is intended to facilitate, might help in limiting overconfidence, a trait which is often found among money managers and which is documented to lead to poor financial decisions.

Meditation’s results are hard to quantify. For one, many practitioners say that meditation brings about creativity, but this is almost impossible to prove. Creativity is hugely important in a world filled with funds doing more or less the same thing and producing more or less the same results, but demonstrating a direct link between meditation and creativity is a lot more difficult. It may simply be that calm people are more able to be creative than frenzied ones, or it might in turn be that meditators wrongly attribute their good ideas to the practice.

The lack of data is probably the biggest impediment to evaluating the impact of meditation on investment performance. It is also why we are not likely to see it becoming a widespread marketing point for fund managers any time soon.

Meditation is likely to continue spreading among fund managers in the way it has in the rest of society: from hand to hand as something that people do and find helpful.